At Team Metric we focus a great deal on the changes in post-secondary STEM educational practices and the many occupational paths which make intuitively thinking in U.S customary units (inch-pound units) an institutionalized cognitive disadvantage to solely US children. Therefore, we thought it might be fun to take a more historical perspective than a practical one. Let’s take a quick jump back into history, and we are not taking about the attempt at US-wide metrication during the Carter administration, we’re going back many more years…..

For over two thousand years, the Roman Empire was unquestionably the greatest superpower the world had ever known. As with all powerful nations, the Romans had their own customary systems. This is a story about Roman Customary Numerals.

As a testament to the power of mathematics, it should be mentioned that numbers were the first written language; yes long before words were ever written our ancestors were using tally marks on sticks and bones to represent the concept of one.

The first evidence of counting comes from the Ishango Bone found near the headwaters of the Nile River and estimated to be 20,000 years old.

Interestingly, Roman numerals are very similar to these first bone marking. The original scratches look like the first three Roman numerals 1, 11, and 111. The only added sophistication in the Roman numbering system was the addition of new symbols for higher values. 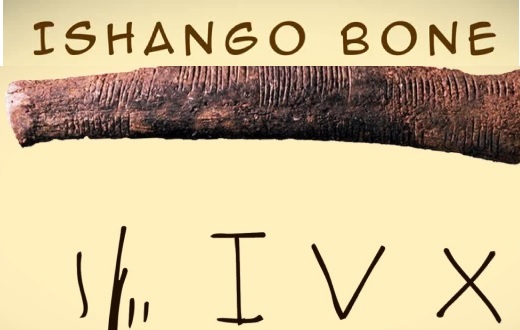 But the language of mathematics began long before the Romans and was influenced by many great civilizations such as the Sumerians and Egyptians. Most notability though, it was the Greeks who sought to turn the abstractions of nature into rules that could guide their lives. The Greeks advanced the practice of mathematics beyond the concept that numbers must represent actual objects and began to think about numbers as hypothetical ideas. The future of theoretical mathematics was here and unstoppable!

Well, not quite unstoppable.  As the legend goes, Archimedes, often considered the greatest mathematician of ancient times, was so absorbed working on his geometrical figures in the sand that when an invading Roman soldier found him, Archimedes famously said:  Do not disturb my circles!

The Roman soldier was not amused and took his own circle – Archimedes’s head!  This interaction would come to symbolize the end of theoretical mathematics in the ancient world and the beginning of the Roman Empire.

Presto! The world around the Mediterranean was back to the old way of thinking about numbers as physical objects. The Romans were not interested in abstractions; they thought of numbers as a way to organize legions and track the spoils of war.

As Roman power spread so did Roman Customary Numerals. At one point, 35.9% of the known world was using Roman Numerals. Even after the fall of the Roman Empire, their numbering system remained entrenched!

The Roman numbering system looked indelible … but there was another system of numbers in practice in a different part of the world around 500AD – and they were heading towards a confrontation with the Roman Numerals for world-wide supremacy in what ancient prophets called “Countdown to Correct Counting Beatdown.”

This battle was to begin in the pacifist country of India where people were more concerned with enlightenment than war.

The Indian worldview was not constrained by their physical existence. The Eight-Fold Path to Nirvana is not easy to achieve. It is a very long spiritual journey that takes a very, very long time to complete. To convey the Hindu understanding of their journey, they created some stupendously big numbers. The numerals we commonly refer to as Arabic numerals are actually Hindi numerals- used in India since 500BC.

Then, around 1500 years ago, a mathematician in India came up with the most amazing, enlightened, transformative concept since the Sumerians created mathematics.

Everyone say hello to “zero” in all its existential glory!

Team up zero with one and they are unstoppable- with the ability to represent gigantic sums and minuscule proportions.

Add the other 8 numbers and the possibilities are endless.  The addition of zero allowed Eastern science to storm ahead – Indian astronomers were centuries ahead of their Christian counterparts. They worked out that the earth spins on its axis, and that the earth moves around the sun – something that Copernicus in Europe would not figure out until a thousand years later. Indian scientists also calculated the diameter of the globe and were less than 1 percent off.

All this was possible by the creation of our numerical superstar -ZERO!  The 0-9 Hindi-characters quickly spread to the Middle East. Legend goes that an Ambassador from India traveled to modern day Baghdad. The Ambassador was required by custom to present the legendary Caliph Al Mansur with a gift, but the Caliph was a man of infinite riches. But this Ambassador was very wise and decided to give the Caliph the greatest gift he could think of- the gift of Hindi Numerals!

Actually, we do not know how the Hindi numbers were adopted throughout the Islamic world, but my Indian family takes great pride in this story!

Now firmly established in the Middle Eastern world, 0-9 was advancing science, mathematics and astronomy to new heights. But, across the Mediterranean, our old friend Roman Customary Numerals were still flourishing and, being Roman, they were not going down without a fight. A show-down was inevitable and the outcome would change the direction of the entire World.

The beginning of the end for Roman Numerals started in Algeria, North Africa in 1180AD.  An Italian boy, the son of a diplomat, was to learn about the Hindi 0-9 numerals.

This young man later wrote, “When I had been introduced to the art of the Indians’ nine symbols through remarkable teaching- knowledge of the art very soon pleased me above all else and I came to understand it.”  That young man was Fibonacci, often considered the greatest European mathematician of the middle ages.

Fibonacci took the Indian numbers back home to Italy and, in an effort to spread the “great news,” wrote a book to showcase all the calculations possible with 0-9.  Ever the cutting wit, Fibonacci called it –The Book of Calculations!   (Liber Abbaci)

Fibonacci’s book not only persuaded many European mathematicians of his day to use the “new” numbering system but also the emerging merchant class. At this time capitalism was coming into its own in Europe, and “The Book of Calculations” became a must read for bankers or anyone working with complex numbers.  However, Fibonacci’s book never gained the mainstream traction, he desired.  After all, ordinary Italians had been TAUGHT the Roman numbering system and had utilized it all their life.

And it was not simply tradition; ordinary folks had some good reasons to hold onto their Roman numerals.

One reason was that many medieval cities had their own currencies, so when someone would visit a new town they would need to exchange out their money.  A traveler would need to go to the money changer’s bench- or “banca” as it was called in the middle ages.  A traditional Banca was basically a table abacus with tokens instead of beads. The people who operated the banca would have to swear an oath not the cheat their clients. If the Magistrates found a moneychanger was cheating, they would come and break his bench. The Banca would be “rupta” (the Latin word for broken). This exchange was labeled “Banca-rupta” from which we get the modern English word- bankrupt.

So, it would have been comforting to ordinary Romans to see the Roman numerals they were accustomed to and the conversions performed on an table abacus which they understood, well kind-of understood.

But what if an ordinary Roman were to visit the other table- the one using the new Hindi numerals.  This Moneychanger does not use an abacus but a writing tool with parchment.  He is not moving around counting objects, instead he converts your money using unfamiliar symbols and methodologies. Even his banca is designed differently with added security and safety measures to prevent robbery or prying clients.

Would you not become suspicious if your bank started keeping your account in Chinese characters while telling you to basically, back-off?

The distrust in the new Hindi numbering system went straight to the top. In 1299 the city of Florence outlawed the use of Hindi numerals and banned merchants from using them. But no number was treated with more suspicion than Zero.

Zero was treated with such mistrust and skepticism that the Roman name for it “Zeifer” would later become our English word for secret code – cipher.  Yes, that is correct!! The numerical superstar of the middle east that, along with its partners, had already made invaluable contributions to scientific and mathematical endeavors, faced strong opposition in the hearts and minds of ordinary folks.

Well, how did the Indian numerals finally overtake their Roman counterparts and rest of the world?

It was not logic or forward thinking; it was self-interest! In the areas of commerce and banking the necessity to round up Roman numbers was costing merchants valuable fractions of percentages in real money. The Hindi numbers were simply better at handling the complexities of contemporary calculations.  As capitalism gained respectability and more people aspired to become part of the merchant class, the need to work with and understand complex numbers became essential.

So centuries after Fibonacci brought the nine Indian symbols to Italy, they had finally conquered their Roman counterparts – and when the end came it was decisive. The quick and versatile Hindi numbers had won the war…. 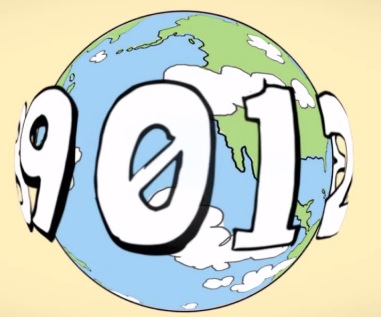 But 0 and 1 were fated for a different future, and it would not include their partners…….. 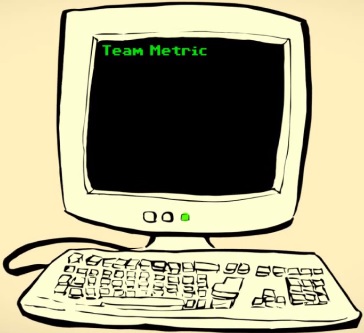 It’s hard for us to imagine a world without the now universal numbering system or a fear of my favorite number, zero.  You might even have a hard time understanding the reasoning for people fighting to keep the familiar Roman customary numerals even when presented with an easier and more adaptable alternative.  Or is it…

Roman Numerals are to Hindi Numerals

Customary Units are to Metric Units